You've been on the merry-go-round of 'healing' for as long as you can remember, trying EVERYTHING, reading all the books, doing all the courses and listening to all the gurus but despite your best efforts you CAN'T LET IT GO!

The insecurities, doubts, fears and hurts.

They are all still there and nothing is helping!

You want to leave the past in the past so you can create the Future you deserve and so you go and do ANOTHER course, or work with ANOTHER expert.

Because you're an ambitious woman and you have things to do and achieve in your life!

AND you want more than just 'feeling good' for a short time.... you want LONG-TERM release from it ALL.

A Creatrix® Breakthrough is the ultimate FEMALE-FORMULATED emotional detox that releases you from all the baggage of your past at a Conscious AND Unconscious Level to set you free for the future YOU choose for yourself.

APPLY FOR A CREATRIX® BREAKTHROUGH

For the first time in my life I feel clean - there is no head chatter, no doubt, no insecurity. I can only describe what Bree has done for me as an Emotional Detox. I have more clarity around my purpose in life, more confidence in myself and I'm excited about my future

What is a Breakthrough?

Imagine what life would be like without feeling bogged down by 'feeling' bad - angry, guilty, frustrated, overwhelmed, stressed, anxious.

Imagine what life would be like if you didn't have to think about not thinking negatively, because there was just no need for it.

Imagine what life would be like if you could wipe the slate clean and START FRESH - with a fresh new perspective, an aligned view on your life direction and NONE of that stuff that keeps pulling you into shit.

A Breakthrough is your fresh start. Creatrix® was formulated to speak directly to our Female Brain and works epigenetically to clear the cause of emotional weight to set you free. And I am so confident that Creatrix® will break the cycle of all the heaviness you're currently feel, it will break the cycle of your reoccuring head talk and set you free from all of the 'stuff' you keep getting caught up in, that I offer a 100% outcome guarantee.

What does this mean?

I've worked with more than 330 years over the past 6 years, and to date EVERY. SINGLE. CLINET that has had a Breakthrough with me has achieved EXACTLY what she was wanting from Creatrix. Every. Single. Client. Because Creatrix® works like NOTHING you've ever tried.

,CREATRIX® is a breakthrough process and methodology that causes fast, thorough and long lasting results mentally, psychologically, emotionally and sometimes physically, not previously seen in women.

It was created in line with the innate way women operate according to biology, spirituality, hormonally and psychologically with the understanding women access the maternal and creator elements of consciousness not previously hypothesised.

Science, personal development, psychology and even NLP, TimeLine and EFT (tapping) are all based on mens' perspectives on how the brain consciously and unconsciously works. Creatrix® is based on what they missed, the truth about the female's hormonal and emotional connection entwined with her biology and psychology.

For example - as women, we KNOW we are different - our monthly hormone cycles are just one (very obvious) point of difference. Why does this matter in Personal Development - well, have you ever worked with something like Affirmations - there are times of the month when you truly do believe what you're telling yourself..... a couple of weeks later though - that same activity that previously helped you so much, it leaves you full of self-doubt - with the little devil on your shoulder contradicting EVERYTHING you are telling yourself.

THIS is just one (very simple!) example of a well known Conscious-based Personal Development approach NOT working with who we are as Females.

TALK TO BREE ABOUT CREATRIX® 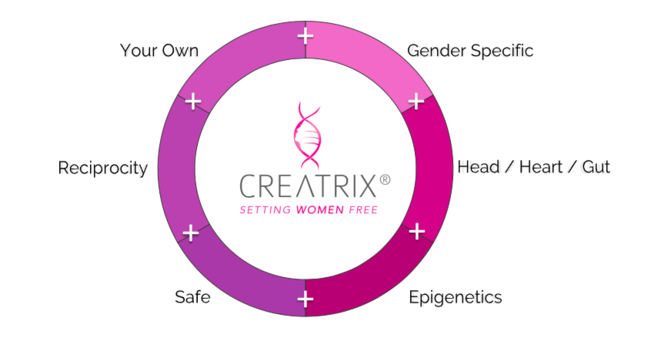 Women who have experience Creatrix® will tell you that it's simple, fun and easy to do.... and SOMEHOW it just works.

That's because, throughout the process you....

Re-LEARN – Your own soul's life lessons & tools to move forward

Re-FRAME – Your entire perspective so you can

Re-CREATE – The life you want

Book a Call with Bree

TALK TO BREE ABOUT CREATRIX®

In 2013 I became one of the worlds first Creatrix® Transformologist® and to date remain the most experienced licensed facilitator in this unique for the female brain process.

Promising rapid, long lasting results, the 330+ clients who I've worked with in Creatrix® have had outstanding outcomes when it comes to emotional issues and beliefs that stop them from living and creating their dream life.

Anxiety, stress, overwhelm, unworthiness, insecurity, anger and everything in between need not be issues or problems that weigh you down - you CAN give yourself an Emotional Detox™ and Creatrix® is the answer.

Want to see MY Creatrix® journey? Watch the video below and judge for yourself the impact that Creatrix® has had on me personally AND the impact it can have for you!

I was struggling with everyday life. I couldn't stand to face the world or my family for that matter. I wanted to go away and not deal with any aspect of my life.

Bree helped me be at ease a myself, love myself, have self worth and most importantly be a better mum and role model to my 4 girls. My relationship with myself has also changed because I can look in the mirror and accept what I look like because this is me!

I was most surprised by the Issues of the past that I was positive I had dealt with and left behind me - they came up throughout the process and we were able to deal with them properly. It's amazing what we store in our bodies and try to hide away.

My husband and children are the most important aspect of my life and I could not stand how I was treating them due to depression/anxiety, no self worth or confidence. We all deserved better. Now I'm so much calmer, I have a positive outlook. I'm looking forward to our future and this portray's such a positive tone for the family to follow.

My life and families life has improved in leaps and bounds. Honestly I didn't have any concerns investing in a Creatrix® Breakthrough because I was at such a low point that I was just so desperate for help. I knew I had to put my emotional state in the hands of someone who 'understood' me and Bree was the perfect solution.

I can't recommend Bree enough, and I cannot thank her enough for what she had taught me. It's invaluable, every woman should have this experience!

APPLY FOR A CREATRIX® BREAKTHROUGH

Are you in the Empowerment Industry with a deep passion to help women be FREE from the burdens of their insecurities, doubts and fears?

Does your heart hurt when you see women  STUCK in their past, desperately trying to free themselves with course after course, training after training, only to get mediocre results that provide a temporary reprieve from their struggles?

Are you frustrated with the results you're able to achieve (or not able to achieve) - you know you've got good services to offer your clients, but you can also see that everything you know has a limitation.... like it's just not getting DEEP enough to provide the transformation you want to be able to offer.

Have you been searching for something.... a missing something that you can stand behind with 100% confidence that when you start working with a client, you can GUARANTEE her outcome?

Book a Call with Bree